The Art Of Straight Talk

Straight Talk – a brilliant concept that we all like to think we’re good at, yet when it comes time for the rubber to meet the road, the truth is most of us actually end up saying a ‘nicened-up’ version of what we really meant to say.

Most of us think we tell it like it is, and wonder why we have miscommunications and misunderstandings in relationships. We think we say what needs to be said but wonder why our boundaries get crossed. It’s also really common to find yourself in the position of playing detective, having to try and decipher what someone is really trying to tell you by interpreting their mixed message or partial information.

Which way is it? Are people saying the whole truth and nothing but the truth? Or are they kinda sugar coating and talking ‘around’ things?

From here, it’s pretty easy to get that people generally suck at straight talk. They either suck at saying what needs to be said or they suck at clearly communicating it even if they’re really trying.

I thought we should dig a little deeper at this and hopefully create some freedom around straight talk and what it can do for you.

So first, let’s start by looking at what straight talk isn’t…

Straight talk is NOT:

I’m sure you can see those are clear examples of the exact opposite of straight talk! However, although we all get that’s really ineffective communication, we’re all guilty of doing it at some point or another.

Sure we all do it from time to time, but have you ever considered what the impact is on you? Most of us haven’t really thought about that side of things – we’re mostly just trying to avoid upsetting people or making people uncomfortable. But for real – stop for a sec and think about it: what’s the impact of NOT straight talk on you and your life?

You’re left at the mercy of someone else, waiting for them to figure out what you were actually trying to say.

This immediately puts your personal power ‘over there’ with them, leaving you less powerful than you could be – the yucky word that comes to mind here is victim.

So, why would anyone in their right mind do this?

If you put your power over there with ‘them’ then it’s their fault if you don’t get what you want or need.

Often that’s a lot easier than having to deal with it being your fault if you don’t get your way – right? Take a moment and let that sink in… If you make someone else responsible for you not getting what you want, you never really have to take ownership of your life and the current state of it. It will remain someone else’s fault that you’re not living the life you want.

Ok. So this obviously leaves us considering: exactly what is straight talk?

For example, straight talk is saying “I appreciate the invite and I can’t make it” and then dealing with the consequences of that (the disappointment or reaction from the person who invited you) instead of making up excuses why you’re not coming or just not showing up.

Straight talk is asking for what you need directly, and then understanding there is a chance you won’t get it – AND – it’ll be up to you to deal with the results either way.

Straight talk is just that: 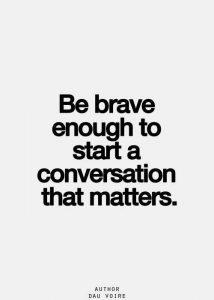 When I first started looking at straight talk, I totally thought I had it handled. I thought I had it figured out and I was really frustrated with a number of the people in my life for not having mastered the ability to say it straight for themselves, but thinking they had. I was coming from a reactionary place due to the frustration I was experiencing from people in my life not saying what they really meant. It was maddening!

I could tell that so many of the people I interacted with were:

It was making me crazy!! Come on people! What are you thinking! You’ll never get the life you want if you don’t speak up!! What are you waiting for??

Then, of course, a dear friend reminded me of the FACT that whatever you can’t be with in someone else is something you can’t be with in yourself. I had to stop and look at that. What was it that I found so infuriating about the people in my life stuffing their feelings?

I always thought I was extremely communicative and articulate when it came to talking about how I felt but the more I looked into this, the more I could see that I wasn’t nearly the straight-talk-master I thought I was. It took me the better part of a year to really start to unravel this mystery… I started paying very close attention to when I was and I wasn’t speaking my truth.

As it turned out, although I had been really good (and I mean STELLAR) at explaining my side of the story or getting across my feelings, I’d been crap at actually identifying how I felt. I was really good at figuring out how I should feel or what I should think and then make a great argument for it. However, I was actually really bad at identifying how I was feeling. 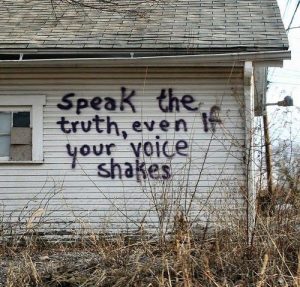 When I finally figured this out, it knocked me on my ass for a while. My communication skills were one of the things I prided myself on; my ability to explain things and connect people to ideas and concepts and be articulate was a major part of who I thought I was! How could it be that although I was a really quick and clever thinker, and really good at stringing sentences together, I was actually really not-great at identifying how I truly felt and what I truly wanted?

Clearly I had some work to do!!

It’s taken time and concerted effort to get to a place where I can say that I’m a practicing straight talker. I don’t always do it right away and sometimes I totally mess it up, and regardless, it’s been worth the effort. It’s made a huge difference in all of my relationships from my business life to my personal life with friends and family.

Now I’ll be the first one to admit that straight talk is not always the easiest thing in the world and I still have a ways to go in developing my skill. It takes courage to say what you mean, speak your truth, and ask for what you need. It can be scary to put yourself out there like that! And the alternative leaves you at the mercy of someone else… a vicious circle.

Where in your life are you avoiding being honest about something?

Where are you not clearly stating or asking for what you want or need?

What are you avoiding telling someone about how their behavior makes you feel?

The impact on you of denying this part of you is HUGE… It slowly kills your vitality and leaves you feeling disempowered.

Here’s some straight talk directed at you: You do have power.

You can speak your truth. It takes courage (the willingness to risk and not know the outcome) and giving yourself permission to fail and know that it’s not the end of the world.

Think about what do you have to gain by using straight talk.

You, your happiness, and fulfillment are worth the risk.

Psssst… As you can tell, times are changing – rapidly! And in the shift that’s happening, it’s going to be more important than ever that you are speaking up for yourself and asking for what you need and want. If you’ve never done that before, it will be confronting to start doing… like super confronting. So… let me help you figure it out. Let me help you navigate this uncomfortable space and support you in claiming your voice and truth with power. Hit me up for a free consult call and we can talk about what’s possible.

3 Simple Tips That Can Eliminate The Pain Relationships... some are a joy, and some are… well… not that. However, life without them would be … END_OF_DOCUMENT_TOKEN_TO_BE_REPLACED