The Secret To Eliminating Drama 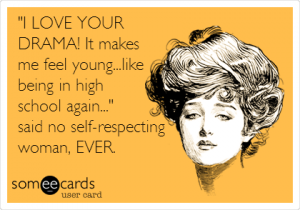 (I know right? Who would invite drama? This should be an easy decision… I’ll let you in on a secret: it’s not about the drama… it’s about making a choice rather than being ‘at-the-affect-of’ the situation.) Let’s have a look…

One of the cool things about this example situation is that I was actually conscious enough to notice that I was in the position of having to make a choice.

So often when situations like this come up for people, everything seems to happen so fast we don’t even notice that we’re making a choice at all, we just keep doing what we’re doing and later look back and say “WTF was I thinking!?!? How did I not see that happening?!?!”

So yes, fortunately for me in this situation I caught myself the moment before I plunged headlong into the abyss and stopped.

The second cool thing about this experience was that when I stopped and looked I realized that just because I had the chance to make the choice, didn’t mean I wasn’t going to do what I would have done if I hadn’t stopped to think.

I realized that just because I had the chance to say no to the drama, didn’t mean I was actually going to… and in realizing that, what happened was I became immediately responsible (and therefore in the driver’s seat) for whatever was going to happen as an outcome based on my decision.

It was a really interesting thing to witness happening. 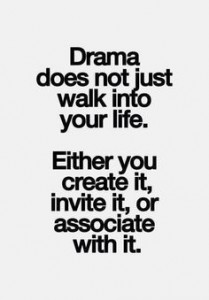 Now, why am I telling you about this? Well because I’m hoping you’ll get something for yourself out of it.

Either way, there would be consequences from my choice. The point I want you to get is that by being conscious of making the choice, I was also conscious of and therefore responsible for the outcome and potential consequences – regardless of what they were.

I knew that if I invited this person in, inevitably there would be some type of drama along with everything else – that would come along for the ride – which might also include some really good stuff.

If I kept the door closed I wouldn’t have to deal with any of the drama… and I’d also miss out on the rest of the stuff too.

I also knew that no matter what went down, I wasn’t going to be able to complain or whine about it after the fact because I accepted the consequences beforehand when I made the choice to open the door. I wasn’t going to be able to call up my bestie after the fact and whine about what was happening as if I’d had no choice in the matter. If I called her up and complained she’d have every right to say: “you knew this was a possibility so quit complaining and figure out what you’re going to do about it now that it’s happened.”

From one side that might seem a little bananas – to choose that you’re willing to accept the potential drama. From the other side though, it’s actually really empowering. Instead of setting myself up to be a passive victim of the consequences, this way I’m becoming an active participant in the learning that will come from whatever happens.

You want to talk about doing something different and getting different results?? That’s definitely one way to do it!!

Put yourself in a position – the driver’s seat – where you can see what’s coming and proactively deal with it instead of sitting in the passenger seat (or in the backseat with your head down, earbuds in, while cruising Insta) where you have no power to effectively affect your life.

In retrospect I actually think regardless of whether I opened the door or not, I am eliminating the drama. Drama comes when people are feeling like they have no power in a situation and things are happening to them – life is doing them instead of them doing life.

When you are actively looking to put yourself in the driver’s seat, no matter what the situation or what you choose, you are eliminating the opportunity for being a victim in your life.

When you choose what’s happening to you, you can’t blame other people and circumstances for how you’re being affected.

That’s not always a comfortable place for people to stand. Of course from the outside looking in it seems like a no-brainer – to make the choice consciously and proactively instead of just letting it happen – however when we’re in the moment it’s way easier to just go with the flow and be ‘at-the-affect-of’ life.

So there you have it. Whether you like it or not, you always have a choice. Your job is to get skilled in being able to see it in the moment and do something about it. When you aren’t responsible for the fact you have a choice (say yes or say no, react or don’t, etc.) you immediately have drama. When you ARE responsible, the drama disappears.

Where are you letting life do you instead of you doing life?

What are some choices you need to make to eliminate the drama?

3 Simple Tips That Can Eliminate The Pain Relationships... some are a joy, and some are… well… not that. However, life without them would be … END_OF_DOCUMENT_TOKEN_TO_BE_REPLACED