Let’s Get To The Root Of It 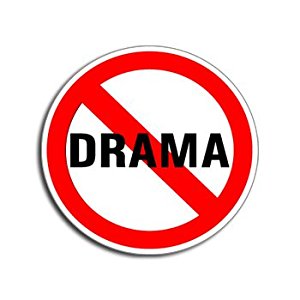 Have you ever noticed that when you’re not getting the results you want in your life there is often a serious amount of drama happening at the same time? You’re upset, over thinking, over analyzing, strategizing, feeling resentful, etc…

And it often seems to be the case that it’s “their” fault as in so-and-so is not behaving the way you think they should be and if they were only doing _______ and ________ instead, then everything would be fine! Seriously!

Now before you can effectively answer this question about drama, you need to have a clear understanding of what drama means in this context.

According to dictionary.com drama is defined as: “Any situation or series of events having vivid, emotional, conflicting, or striking interest or results.”

That definition doesn’t really create a clear context for this conversation so let me explain a little further. Basically, consider that anything you (or the other person) are doing in an attempt to get something or to cause a response/reaction in someone else is considered drama.

We often act in strange ways to fulfill on making the list of above things happen for ourselves. Some people slip into a “poor me” state looking for sympathy and hoping to have people do things for them. Some people slip into a “let me help you” role taking the spotlight off themselves and their needs. Others will use power, blame, and ‘you’re wrong’ to get their way. 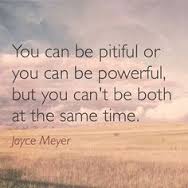 Somehow we learned that these types of behaviors make more sense than just being honest about what we need or want. This tendency usually comes from the deep-rooted fear that if we just asked for what we wanted we’d get rejected and told no. The trouble is, if you never ask for what you want or need, it’s likely you’ll never get what you want… and yet most people will still avoid being straight about what they want and need.

I’m sure if you think about it, you can remember at least once in the not so recent past where you’ve wanted or needed something but rather than just ask and get a clear answer, you’ve beaten around the bush or ‘sort of’ asked and then you never got what you wanted.

Let me give you an example: You’re going to dinner with a few of your friends and the restaurant that was decided on isn’t one of your favourites and you’d rather go somewhere else. Rather than just asking if you could move the reservation you do things like:

Rather than just coming right out and saying: “Hey guys, I really don’t like that place would you mind if we went _______ instead?” people just do this circular talk hoping that someone will pick up on the hints and do something.

From a conscious perspective this doesn’t really make any sense, that we would be allowing such a nonsensical idea of not asking for what we want to run us – but we do it all the time. It’s almost like the smoke-screen of the drama will stop us from having to see the reality of the situation!

Why Do We Do This? 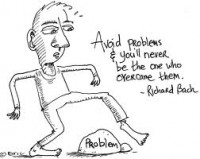 A bigger, deeper root of this issue is due to the tendency of resisting taking full responsibility for our lives and ourselves – all of it good and bad. Plain and simple it’s just easier to (most of the time unconsciously) blame our circumstances on things other than ourselves and our choices.

And that’s just a minor example of how this type of thing happens in real life. I bet if you stop and think right now, you can easily identify a number of places in your life where you’re doing some version of not saying or asking for what you want or need, and instead you’re dealing with the upset, discontent, frustration, hurt – or DRAMA instead!!

How’s That Workin’ For Ya?

If we just asked for what we actually wanted and then were denied we might have to start looking at ourselves rather than being able to point the finger at another and make up excuses for why we don’t have the life and relationships we want.

We’d have to own up to the truth that the reason we don’t have what we want has something to do with the choices we’re making:

And these are only a few examples of how we choose drama over responsibility and choice. It happens all the time, and often in ways that we’re completely unaware of.

Then let me throw this curve ball at you: what would happen if you asked for what you wanted and actually got it? Then what? How would you handle that?

If you talked to your partner and they changed whatever it was that upset you, then you wouldn’t be able to be upset with them anymore… then what would you focus on? You’d have to focus on yourself – which for most of us is uncomfortable.

If you stopped complaining about the job you have and all the things that you know aren’t going to change, and instead got a new job, you’d have to look at whether you were capable of doing it and deal with the fear and vulnerability that goes along with learning something new. Way easier to stay stuck.

I get it… You’re probably shaking your head right now thinking: “This makes no sense!! Why would I do that?!?!” But then you have to grant yourself (and other human beings) some mercy and remember: this type of behaviour is not rational or logical, because we’re not logical and rational beings. We are emotionally driven beings that tend to react and in turn often do things that make no sense and are counterintuitive.

So the challenge here for you, is to start noticing your ‘relationship with drama’. You want to start looking for what your habits and behaviours are around uncomfortable situations – touchy subjects, tough conversations, change, new ventures & risks (think new job or new city), feeling vulnerable, risking rejection, asking for what you need, etc…

Once you see your relationship to drama in action you can actually do something about it. You can finally start taking the steps you need to, to put yourself back in the driver’s seat of your life. And isn’t that where you’d rather be?

Listen… making a shift like this in life can be REALLLLLLLY challenging. It feels risky and uncomfortable, and if we’re honest most of the time it’s hard to even see what we need to do. That’s why it’s sometimes necessary to get outside support because it’s often easier for people who aren’t ‘in it’ to see what’s really going on. If that’s something you’re struggling with and you’re not sure where to turn, let me know. That’s one of the things I’m really good at supporting people in figuring out – where they’re stuck and what to do about it. Hit me up for a free consultation and we can talk 🙂

3 Simple Tips That Can Eliminate The Pain Relationships... some are a joy, and some are… well… not that. However, life without them would be … END_OF_DOCUMENT_TOKEN_TO_BE_REPLACED