Especially With A “Friend” 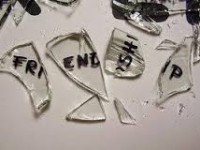 Over the last few weeks I’ve been involved in several conversations about breaking up with friends: when is it ok to? How should you do it? How do you handle the fall out?

This is one of the messiest topics I’ve come across and in all my research I haven’t found any clear answers. That leaves me thinking that the rules really shouldn’t be any different than they are for a romantic relationship break-up.

Friendships are meant to be a contribution to your life. They are meant to leave you feeling like you belong somewhere, that you’re part of a tribe. They are about lifting you up when you’re low and hauling your ass back in line when you go astray.

Of course it’s a two-way street and you need to be reciprocating these things to your friends as well. And of course it’s not always an even-steven, 50/50 division of support; sometimes one of you will be going through more than the other person and one of you will have to pick up the slack – just like in any other relationship.

The trouble comes in when things don’t relatively even-out in the long run; when you’re being pushed down more than lifted up, or when you’re being encouraged to ignore your own truth for the sake of your friend getting their way.

Bottom line: if the friendship isn’t contributing to your life, if it’s more of a cost to your well being, it’s time to do something about it.

What do you do?

Breaking up is hard to do, no matter what the circumstance. We get caught up being concerned for the other person’s feelings rather than honouring our own. We justify and explain away their behaviours in order to avoid dealing with the (potential) conflict that comes with closing the door on someone. 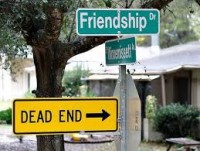 And in the end, when you’re breaking up for the right reasons, don’t you feel better when it’s all over? Even if things go a little pear-shaped and emotions get heated, when it’s all over you feel freer, lighter, and likely happier.

I think the first thing you need to get clear on before you take any visible action is what you want. If you’re simply frustrated about something and you’ve been telling everyone else in your world except your friend about how upset you are, you owe it to them to have a conversation. If you haven’t dug deep, found the courage, and told your friend what the situation is, they won’t be able to do anything about it.

You have a responsibility to be clear with your friend about what your specific concerns are – in a totally straight-forward manner:

“When you contradict what I’ve said about how I feel, it seems like you don’t respect how I feel.”

And those are only a few examples…

I find when it comes to friends, most of the time that’s not actually how we are though; most of the time with friends we ignore, pretend, and tolerate until we just can’t take it anymore. We complain to everyone else about what the friend is or isn’t doing, instead of talking to the only person who can actually do something about the problem – the friend in question.

Something else to consider: if the friend in question can’t take a ‘tough conversation’ about how you feel in the relationship, do you really want to be in a relationship with them anyway??

If you and I were friends and every time I was telling you something that was happening in my life, you chimed in with your 2-cents about a similar experience in your world, and that was making me crazy (because really you’re making the conversation about you – even if you’re just trying to demonstrate that you relate to what I’m saying by sharing a similar experience – instead of just listening to me like I need you to) wouldn’t you want to know?

Whether you were going to do something about it or not is irrelevant. At the very least you deserve the opportunity to make the choice about whether you’ll do something different don’t you?

Of course you do.

And so does your friend.

If you haven’t had a straight conversation about what’s really going on, then that’s where you need to start.

If you’ve had the conversation and things still haven’t changed or you’re still feeling like the relationship is no longer serving you and your life, then it’s time to take action. If you’re clear that the solution here is to dissolve the friendship, then you need to own that. Scary as it might be, you need to step into that truth for yourself powerfully and own it.

Whatever you do, don’t do a version of a break-up where you kind of tell them that things aren’t working and unless they change then you’ll be left with no choice but to end the relationship. That in effect pushes the responsibility for how you’re feeling onto them because you’ve made it ‘up to them’ to change or the friendship ends. If you don’t want to be in the friendship anymore, then say that.

You have a right to your feelings too. Your feelings matter just as much as theirs. If you’re spending time resenting them before you’ve said anything, then if you give them the ultimatum and nothing changes you’ll be that much further down the rabbit hole; you’re essentially wasting that much more time and emotional energy on the situation and again feeling even more backed into a corner and powerless.

If you want to end the friendship, that’s ok. People come into your life (and you into theirs) when there’s a mutual connection. Even if you’re unaware of it, there’s always a connection of some sort: sometimes it’s that you’re in a similar place emotionally and other times it’s that you’re there to learn from each other. Regardless, sometimes the foundation the relationship was built on no longer serves either of you, and the relationship has run its course. When that happens, it’s time to close a chapter.

(On a side note, I will say that sometimes these types of conversations will make way for you to end a chapter and start a new one rather than close the book for good. That is possible, especially if the friendship isn’t toxic – just flat-lining.)

Some key things to keep in mind:

Your feelings matter: you have a right to feel supported and respected in your relationships.

Be responsible: if you’re ending things you don’t want to blame the other person – “It’s because you ______ that I’m ending things!” – you want to take responsibility for how you feel and why you’re taking the action that you are.

Be clear: don’t give a sort-of break-up message. If you’re ending the friendship, you need to say that you don’t want to be friends anymore. You also need to be specific about why you’re ending things, you don’t get to say ‘because you’re mean.’ There’s a high likelihood they’ll have no idea what you’re talking about and won’t think of themselves as mean at all. You’ll need to tell them what it is they do that occurs to you as mean.

Be gracious: anytime anyone gets ‘rejected’ they’ll have a reaction. Sometimes that’s with grace and sometimes it’s by lashing out. If your friend lashes out, don’t make that about you, it’s about them and their hurt feelings and hurt pride. Be gracious with them – without letting them walk all over you if they start name-calling and being mean or disrespectful.

Be respectful: your friend likely never had any intention of causing you upset or frustration. During the conversation be respectful of them as a person and for what they have contributed to your life.

Outside of that… you really just have to bite the bullet and do it. Let the door close and let them go. It’s not easy. Yes, you’ll likely have to grieve the loss of the relationship… and it still needs to happen.

After that, especially if the relationship was toxic, it might be worth your while to do some self-reflection and determine what it is within you that had you feel you deserved to be in a relationship like that; a relationship with someone who was bringing you down or asking you to compromise yourself and your value system to accommodate their needs… That would be a place for some personal work and self-reflection to happen… you know… so it doesn’t keep happening.

PS – Breaking up with friends is one of the most challenging things we’ll ever need to do. So often friendships are left to fester and then become toxic and co-dependent. Do yourself a favour and have the tough conversation before you reach that ugly stage of things. You’ll thank yourself in the long run. If you need help figuring out how to have a conversation like this or even if you should have a conversation like this with someone in your life, don’t hesitate to get in touch! Often the hardest part of this stuff is getting started and I have some great tools and resources to help you do just that!

3 Simple Tips That Can Eliminate The Pain Relationships... some are a joy, and some are… well… not that. However, life without them would be … END_OF_DOCUMENT_TOKEN_TO_BE_REPLACED