Stop Shooting Yourself In The Foot 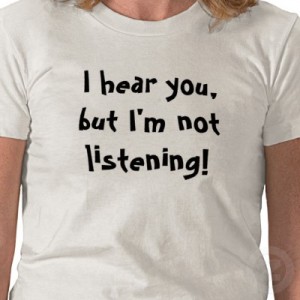 It’s an amazing experience. To have someone really get your world… so often in our fast paced, get to the answer, get it done and move on culture the art of listening falls by the wayside. And that’s a real shame… because the truth is nothing builds connection and relationships faster than effective listening and that’s what we’re all craving!!

In fact, I would assert that most of us are feeling so UN-listened to that we have to speak even more and more loudly than ever before in order to feel heard – and yet with everyone doing that no one gets heard.

It’s like a bunch of people calling into a busy help line at the same time, getting tired of waiting in the queue, hanging up and calling back, and getting further behind every time… It doesn’t work. Talking to be heard instead of listening to understand will derail your relationships faster than just about anything else out there.

So how do you ‘get’ someone? How do you really get their world?

Well first you have to stop talking.

You have to literally stop talking. 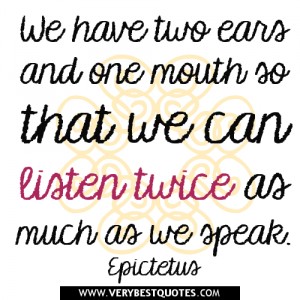 One of the things I’ve learned over time, especially with my career as a coach, is that people often don’t say what’s really going on for them. They’ve become masters at sugar coating the issue and beating around the bush. People are generally crap at clearly stating what they are REALLY talking about!! So learning to listen for that nugget can transform your conversations in ways you’ve likely never imagined.

You and your person are driving home from an event and you notice they’re being a little distant. You ask them what’s up and they don’t really give you much of an answer. You try again a few minutes later to find out what’s going on – this is called a bid for emotional connection. They give you a ‘kinda sorta’ answer about how someone at the event snubbed them a bit…

So you could jump into the conversation about that specific issue. You could talk about overreacting to the snub or that the ‘snub’ didn’t really happen and was likely a misinterpretation or you could even justify why it happened that it’s not a big deal or that the snubber is dealing with a lot right now and they really didn’t mean it blah blah blah… this is problem-solving, not listening.

Most people will immediately jump on the alleged snubber-persecution bandwagon, however in the long run that won’t do anything. It actually contributes to gossip, promotes the idea of separation, and in turn facilitates the breakdown of trust and connection in relationships in general.

If you’re really listening with the intention of creating connection you’re going to want to address what’s really going on… So what do you think is really going on? This is going to require some emotional intelligence on your part – some “EQ” – to figure out.

It’s probably something about being concerned that they’ve upset the alleged snubber in some way and they’re worried about how to fix the problem – if they even know what it is. Of course, this may not be the case so you’ll want to check that out with them instead of making an assumption about it.

What difference do you think a statement like that would make for the conversation compared to something like: “Well they’re a jerk anyway so you shouldn’t worry about it”? One of those options allows your person to speak about what’s really going on for them and one of the options diminishes how they’re feeling and in turn leaves them feeling disregarded… Which is which? I’d go with something like option 1 more often than not as the effective choice if I were you.

You see one of the things that’s not included in great listening is solving. Let me say that again: when you’re really listening to someone you’re not trying to solve their problem for them!!

These are two distinct activities. Listening is a separate activity that needs to occur prior to any solving happening at all.

Trust me on this one. I know it’s easier to solve the problem and in your mind eliminate the need for the uncomfortable emotions that are associated with your person talking about what’s going on. Being with someone while they’re upset or scared or angry or grieving or frustrated and not trying to fix it for them so they can stop feeling that way is UNcomfortable!! It’s like you’re just sitting there doing nothing, being useless!! Especially if you can see an easy solution to the problem!! 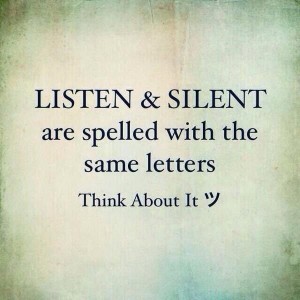 The thing is, just sitting there and being with them isn’t useless at all!! You’re LISTENING!! And that’s a huge deal for people!! We established that at the beginning of this conversation didn’t we?

Listening involves you taking yourself and your assumptions out of the equation.

Listening involves you making the conversation about your person, not about you; listening is you NOT TAKING THINGS PERSONALLY!!

It’s also likely that listening will involve you having to manage your reactions and emotions so they don’t interfere with you person’s expression of their feelings. If you get uncomfortable when other people express emotions like anger, hurt, grief, frustration, annoyance, etc. you have some work to do.

If you want to experience an improvement in your relationships, you’re going to have to learn how to keep your shit in check and not let it run the show. So often in situations like this, it’s actually your reactions to your person’s feelings (how you feel about their feelings) that are responding and engaging in the moment rather than you being the one that’s responding.

(And let’s say for the sake of this conversation that you genuinely didn’t snub them or mean to act in a way that left them feeling snubbed. If you’re in situations where you are purposefully snubbing those you care about, we need to have a conversation about you being passive-aggressive and how that’s an ineffective way to build trust and connection in a relationship. You can check this article out here for more info about that.)

So back to you being the accused snubber… Despite your likely reaction of immediately jumping to defend yourself, I recommend taking a deep breath and trying the same loose process we’ve outlined above. LISTEN. Ask questions. Get clarity. Can you see their side of situation? Can you get them and their world as it relates to this? Give it a try.

What usually happens when (with a dose of compassion) you really listen to someone from where they’re coming from, it’s easy to see how they could feel the way they’re feeling. And what do you say to that? Here’s a super easy, virtually fail-safe phrase you can whip out at any point AFTER you’ve listened and acknowledged what’s going on for your person: (using a sincere tone, because after you’ve ‘gotten’ someone you can sincerely empathize with them…)

“I’m sorry it occurred to you that way.”

That phrase or a similar version tweaked to the situation, is great because it acknowledges the other person’s perspective without making either of you wrong. There’s no diminishing. You’re not apologizing and taking ownership of their misinterpretation of what happened – thereby making them right and you wrong. You’re not telling them they’re crazy for feeling the way they feel – thereby making you right and them wrong. You’re simply acknowledging how they feeling and that’s it.

Caveat: in order to have that simple phrase be effective, it really has to be coming from a genuine place when you speak it. Otherwise, it just sounds sarcastic and like you’re being an a$$hole. And that’ll set this whole snubbing incident on fire in a way that you don’t want.

I guess at the end of the day, listening is about (coach language alert:) ‘creating space’ for your person to feel their feelings and work through what’s going on for them. When you don’t listen, you clamp down on that and they can feel cut off and minimized, and no one likes that.

Good luck!! I’d love to hear from you about your experience with listening and being listened to. What tips and tricks do you have that you’ve found have made a difference for you in your interactions? Leave a comment below or click here to send me an email! I look forward to hearing from you!

3 Simple Tips That Can Eliminate The Pain Relationships... some are a joy, and some are… well… not that. However, life without them would be … END_OF_DOCUMENT_TOKEN_TO_BE_REPLACED